Thinking outside the basin

This week I had the honour of delivering a keynote at the first International Conference of Water Security in Toronto. The conference, which also launched a new journal devoted to the topic, brought together 150 people from hydrology, engineering, and the social sciences, as well as folks from institutes dedicated to water studies. 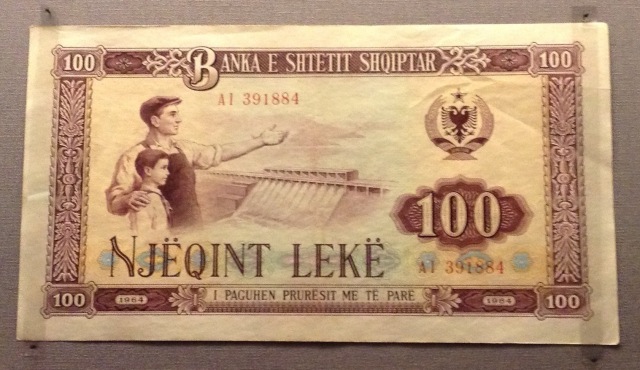 The monetization of water. Albanian banknote with image of a hydroelectric dam (1964).

The outstanding talk of the conference for me was by Rob de Loë, professor at the University of Waterloo and advisor to the joint Canadian-US commission on the Great Lakes. Toronto, where the conference took place, sits on the edge of one of these lakes, which together account for some 20% of the world’s fresh water. In trying to protect a resource like the Great Lakes, de Loë argued, you have to think about more than just the people and economic activities in the basin. When it comes to the toxic algal blooms in Lake Erie, for example, the upstream factors include not only the use of phosphorus-rich fertilizers by the region’s corn farmers, but also longstanding US agricultural policies that promote the production of corn for conversion to biofuel (ethanol).

The biofuels policy isn’t conventionally on the radar for “water people”, but it’s arguably one of the most important parts of the problem.

This made me think anew about the work I’ve been doing with the Omo-Turkana Research Network.  In trying to get together as many researchers as possible who work in the Omo River basin, have we been barking up the wrong tree? Would we do better to target people and processes that operate outside the basin, but impinge on it – like the global hydroelectricity industry, or the sugar trade? Clearly, the conversion of the waters of the Omo into globally-tradable commodities — itself one of the most important steps in the process of displacement that’s playing out in the region —  wouldn’t be possible without these interest groups.

And yet to do research on the sugar or hydro industries without attending to the places and people affected by them is also to miss a big piece of the story. The challenge, I suppose, is striking the right balance between the local and the global.

I came away from the conference with a new sense of the urgency of finding a common language for talking about threats to water resources and the people who depend on them – both in conversations between researchers and other members of the public, and within the community of researchers. Each of us holds a different piece of the puzzle.