The end of alchemy?

Is it prudent to orient our societies around the goal of achieving ‘20 years of growth and prosperity’ if, in the process, we are causing catastrophic climate change?

That’s the question I asked Mervyn King, former governor of the Bank of England, at a forum at UCL this week.

King was promoting his new book, ‘The end of alchemy: Banking and the future of the global economy’.

The goal of a central bank, as he sees it, is to help facilitate economic growth. He’d had his fingers burned during the financial crisis of 2008, which happened under his watch.

When the crisis hit, King said, “I began reading things from the 1930s” – specifically Keynes’ ‘General Theory of Employment, Interest and Money.’ Keynes had lived through the Wall Street Crash of 1929, and had learned the hard way that the market economy is not self-stabilizing.

As King put it: “Stuff happens.”

“The crisis,” King said, “brought home the idea of radical uncertainty: the unknowable, unpredictable. The most sophisticated economic modelling in the world falls down when radical uncertainty is involved, because people aren’t optimizing, they’re just coping.”

Given this history, how was it that during the 1990s and early 2000s, most economists – himself included – didn’t see that global capitalism was on the brink of another crisis?

The answer, he suggests, is that economists were focused on how successfully these same policies had reduced volatility. “Inflation was under control. We confused stability and sustainability.” 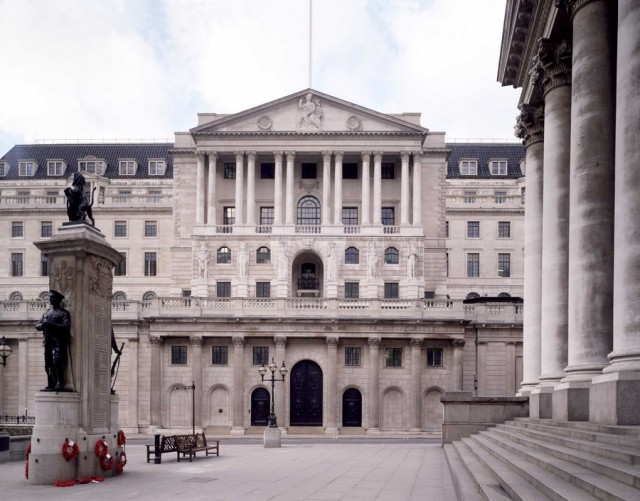 The Bank of England, with First World War monumne in the foreground. “Finance, like war, suffers from the fact that almost all who have technical competence also have a bias which is contrary to the interest of the community.” (Bertrand Russell)

The only way of regaining stability now, King argues, is through regulation. The measures necessary would include increasing interest rates, which would prompt saving-for-tomorrow over spending-today. This, he said, might usher in a period of 20 years of stability and economic growth.

But it’s hazardous to raise interest rates unless everyone else is doing it too. King likened it to the Prisoner’s dilemma: It pays off if everyone does it, but if you’re the only one to stick your neck out, you suffer. “And there’s no available mechanism to coordinate the measures necessary.”

Meanwhile in another universe…

There are uncanny similarities between the work that King feels we should do in the financial sector and what needs to be done in the management of our ecological affairs.

In terms of carbon emissions too, we face a Prisoner’s dilemma. Despite the agreements in Paris, there’s no global mechanism for reducing greenhouse gas emissions, only ‘voluntary contributions’. Without concerted action, cheaters will profit in the short term, while in the long-term we all burn.

During the Q&A after King’s talk I asked about the prudence of the goal of “20 years of growth and prosperity” in light of climate change, the premier source of radical uncertainty in the world today.

“I suggest you invite my friends Nick Stern and Nigel Lawson to debate climate change,” he said. (This got a laugh from the audience – Stern’s views are well known, and Lawson is a notorious climate sceptic.)

To me this was a disappointment. King is right to advocate a broader take on economics, and the importance of attending to history. But in disclaiming any engagement with climate change, he was retreating into a disciplinary cul-de-sac: ‘That’s not my business.’

Admittedly the business of banks is largely to lend money. But in doing so, they effectively create money that didn’t previously exist: It comes into being in the form of debt. As the pressure group Positive Money have argued, if financiers are left to their own devices, they’ll continue to issue debts, and rake in payments; indeed, if they’re ‘too big to fail’ they’ll continue to do so indefinitely.

While the ecological predicament we face is new, the tendencies of financiers to act this way is not. In the 1930s, Bertrand Russell recognized that “throughout the world, not only in Great Britain, the interests of finance in recent years have been opposed to the interests of the general public.

The title of Mervyn King’s book, “the end of alchemy,” alludes to the idea of bankers  possessing the magical ability to turn base metals into gold. But in fact it’s we who grant them this power.

Finance (like politics, and war) is too important to leave to the financiers. If they’re not subject to democratic pressure – if they go on “confusing stability for sustainability,” and are allowed to explain away crisis as simply due to “stuff happening” – we all suffer.

This entry was posted in Uncategorized. Bookmark the permalink.

1 Response to The end of alchemy?